Saving seeds for replanting exposes the farmer to results that can be quickly disappointing, as seed vitality is not eternal and farmers cannot avoid cross-breeding with other wild varieties or even genetic erosion.

Many harvested seeds do not last beyond one season. Tomato seeds lose half their viability after one year. Farmers have found that sweet corn loses about a quarter of its viability each year (1). One of the benefits of modern agriculture is that farmers do not have to store seeds as their ancestors did, who often ended up with degenerate varieties. We can order selected seeds from seed companies and plant them when they are fresh at their best. 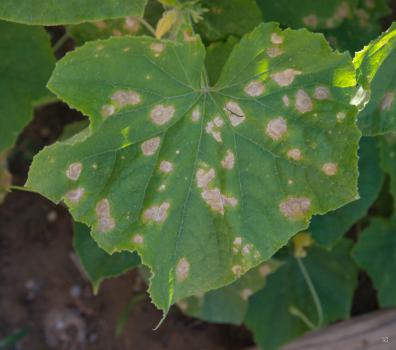 Anthracnose on cucumber leaves. This fungus develops rapidly in the presence of high humidity or after watering at the end of the day, which increases the amount of free water on the foliage. There are varieties that are more resistant to this disease such as Slice King Hybrid F1. It is advisable to rotate with non-host plants such as lettuce, beans, cabbage.

Most plants from farmers' seeds are more frequently affected by certain diseases, but some are also known for their robustness due to their particular morphological characteristics (larger volume of foliage, rapid growth, stronger cuticle protecting the stems and leaves...).

Genetic resistance to disease has never made it possible to avoid using pesticides because it is too weak to withstand the evolution of pests. It is also for this reason that the number of old and robust plants that can still be used is tending to diminish, weakened by the appearance of more destructive pests due to genetic mutations or originating from far away places.

Varietal improvement techniques, also known as "green biotechnology", have made great progress in recent years. Grafting and hybrids have been researched in order to produce plants with superior properties to the original plants. The technique of gene transfer has made it possible to obtain a now well-known variety of cereal crops, triticale, obtained by crossing wheat and rye, which is now widely grown in organic farming.

The hybrid forms of tomatoes that have appeared in recent years and are grown in the field have resulted in significant resistance to two recurrent diseases, downy mildew and alternaria. These advances result in a significant reduction in fungal treatments while increasing yields without loss of taste.

F1 hybrids are the first generation of a cross between two genetically very different but compatible varieties. F1 hybrids are sometimes despised because they degrade in the second generation and because their use leads to dependence of the gardener on the seed company. The commercialisation of any new variety requires years of research and a significant investment cost that a farmer, let alone a home gardener, cannot afford. Discriminating against these seeds on ideological grounds means not using scientific advances that have a major impact on environmental protection and the reduction of plant protection products.

Regulations on the sale of registered seed.

It seems that in order to preserve biodiversity and not be dependent on seed producers, every citizen should have the freedom to buy non-approved seeds. This is what some associations and NGOs claiming to be part of the organic movement are demanding. In french a farmer who sells tomato seeds that are not registered in an official catalogue at a market is liable to a fine of €250. The regulation on the sale of seeds would be imposed on us to protect the interests of the big seed companies and it would be forbidden to sell seeds of old varieties.

In reality, anyone can sell old or patented seeds provided they are declared and the characteristics of the seeds are recognised and verifiable. This law was put in place to protect the farmer, the individual and the seed companies. It prevents a variety from being sold under different names or the same name being used for different varieties without the buyer being able to verify the authenticity of the seed.

There are those who claim that farmers' seeds are better adapted to the land and have more taste. More than 40 years ago, I used peasant varieties very often. Like many gardeners, I gradually abandoned them for several reasons:

Older varieties often lack genetic stability. For the same variety name, it is not uncommon to find that the seeds give quite different plants of different quality. For example, for Egyptian red beet, from one root to another, the size of the roots and the difference in taste quality are often significant, which is less frequent for the improved variety.

Some varieties are no longer cultivated because of their low yield or because their quality is inferior to the new varieties. This is for example the case for all bean seeds that produce hard and/or thread-like pods even when small. This is also the case for bitter cucumbers, which have fallen into disuse despite being known for their medicinal properties.

Compared to registered varieties, the disease resistance of farmers' varieties, such as verticillium wilt, is often lower and yields are reduced. This disadvantage may be bearable for an amateur gardener who loves old varieties, but it is no longer so for a professional market gardener who manages several hectares and has to deliver products with specific characteristics to his customers.

Some varieties require specific cultivation techniques that are costly in terms of equipment and labour, such as rowing pole bean, which require much more space and the use of numerous 2 m long supports and the labour required to assemble these supports. New varieties of bush beans dwarf have yields comparable to rowing pole bean.

Some vegetable crops have been abandoned because consumers (and home gardeners who are also consumers) are moving away from them to other vegetables for cultural, taste and cost reasons, or because they are commonly prone to disease. This is the case of the bean, which is less and less cultivated in France, as it is often affected by anthracnose, grey rot (botrytis, also known as chocolate spot disease), and rust. Bean grey rot is more frequent in the Mediterranean region (2).

Some remarks on organic seeds.

Organic farmers do not always use organic seed. If they cannot find enough certified organic seed for their needs, they can use conventionally grown seed and still label their crops as organic. Furthermore, organic seed does not mean that the mother plant has not been treated, as in organic farming pesticides are registered to protect the seed against certain pests. For example, it is practically impossible to prevent bean seeds from being infected by bruchid (bean weevil larvae or Acanthoscelides obtectus that burrow into bean seeds) without the use of a pesticide (pyrethrin, neem oil...) against this pest.

Protection of farmers and individuals :

Verticillium; a disease of old varieties:

Gradually, the vessels become clogged and the sap flow stops. Verticillium disease is easy to recognise; it is characterised by the appearance of a yellow-brown V-shaped spot on the edge of the leaflets. The disease spreads from bottom to top. Gradually the tissues become necrotic and dry out. The outside of the stems do not show any particular symptoms, but a longitudinal section of the stems often shows a brownish discolouration of the vessels. The disease is most prevalent on older varieties, especially in spring and autumn. Its development slows down when the ambient temperature rises above 30°, which would explain the reversibility of this fungal infection in summer. There is no control method to eradicate verticillium wilt during cultivation. Plants affected by the disease must be uprooted.

Let's imagine that someone offers to buy tomato seeds of an old variety called "Saint-Pierre manosquine" (a fictitious name created for the example) producing large red fruits comparable to Saint-Pierre, but more productive. Who can assure you that this old variety has the properties announced by the seller at the time of purchase? And if this variety is known in the region, who can assure you that the seller does not present you with seeds belonging to another variety, or that the Saint-Pierre manosquine that he has been reproducing for years is not affected by genetic erosion? To ensure that farmers and private individuals do not fall victim to these scams, the legislator has provided that old varieties should also be protected. Registration thus provides buyers with guarantees on the advertised properties of the seeds presented by a regularly registered seller. Registered seeds that have been declared are grouped in several registers, the list of which is available on the GNIS (Groupement interprofessionnel des semences et plants) website by clicking here.

For seed producers, on-the-spot checks are carried out to ensure that 'the variety multiplied corresponds to that expected and has a sufficient level of purity, that weed species and seed pests are absent within the lowest limits' (3).

The seller must also be declared so that the administration can check from time to time what he is producing and selling. To this end, the seeds must be placed in packages specifying the species sold under its botanical name, the batch number, etc., so that any inspector can check their authenticity. Of course, this regulation also protects the seller who claims to have certified varieties against possible dishonest competitors who refuse to declare themselves.

Protection of producers of new varieties :

For research to progress, it needs to be funded, and for farmers looking for new disease-resistant varieties, there needs to be an annually updated catalogue. Research in agronomy is very expensive and is mainly carried out by companies with a large budget or by INRA. Part of the profits of seed suppliers is reinvested in research to produce more competitive, higher yielding and better quality varieties. Farmers have the right to replant about 20 patented, self-replicating seeds (called farm-saved seeds) provided they pay a fee. Paying this fee is remuneration for research from which they have already benefited. This remuneration is comparable to copyright protected by the SACEM. Using self-replicating seeds protected by a patent is equivalent to remuneration for the dissemination of an artistic work.

But why insist on going back to old varieties? In both integrated and organic farming, the main aim is to reduce the use of pesticides by favouring plants that are more resistant to disease. For example, many modern tomato varieties, especially F1 hybrids, are resistant to verticillium wilt. Tomato names ending with VNF are resistant to Verticillium, Nematodes, root-knots and Fusarium (such as the F1 Pomona VFN tomato from Baumaux seeds, the F1 VFN beef heart tomato). Courgette AF1 is known for its good taste, excellent productivity and good disease resistance. In cucurbits, spectacular progress has been made against plant pathogenic viruses and fungi when hybrids have been introduced to the market. 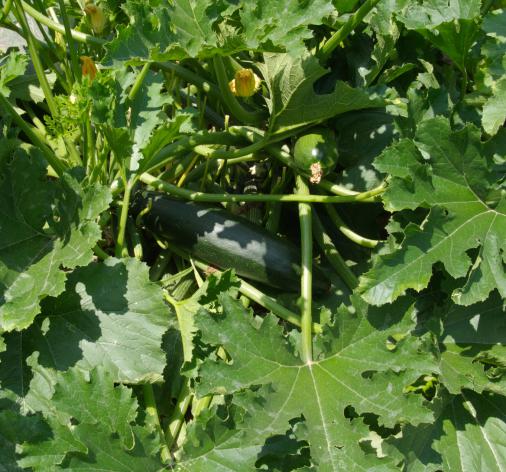 It is absurd to want to return to ecological agricultural practices without using the latest seeds that are supposed to reduce the risk of disease, on the pretext that they are protected by patents used by multinationals. Some modern varieties have been created by INRA, which is not a private institution, such as the "Pieraline" tomato (resistant to mildew and Verticillium) derived from the old "Saint-Pierre" variety, or the VFN tomatoes "Piersol", "Marsol" and "Rossol".