Rotations are not useful against flying insects like aphids. Rotations are useful against soil-borne pests (which live naturally in the soil), mainly fungi and bacteria. Crop rotations have a limited impact on insect larvae that overwinter in the soil, as flying adults can easily migrate to their nearby hosts. However, the further apart the plots in a rotation are, the lower the pressure of overwintering pest larvae in the soil. Ultimately, the objective of rotations is to avoid the accumulation of plant pathogen spores and, secondarily, pest larvae in the soil.

Here are some examples of bacterial and fungal diseases that can be reduced by crop rotations:

Although tomatoes are less susceptible to downy mildew in south-eastern France, they cannot escape other pests such as alternaria (brown spot disease) - a relatively common disease where weather conditions and humidity play an important role. Alternaria is favoured by a warm and humid atmosphere. This infection caused by a fungus (Alternaria dauci f. sp. Solani) is often confused with downy mildew, which does not show a concentric pattern, or wilting (caused by physical stress, other not necessarily dramatic pathogens, ageing of the plant, predisposition due to genetic erosion). 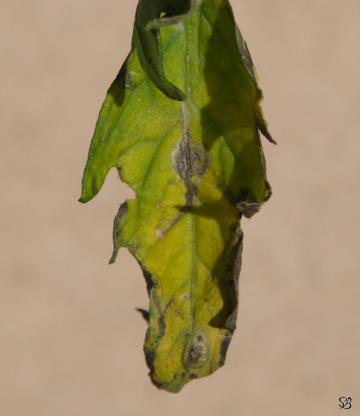 Beginning of alternarioze on tomato leaves appearing as brown and concentric spots.

Alternaria is characterised by the appearance of more or less circular black spots on the leaves and stems. The leaves dry out rapidly. The spread of the disease results in defoliation of the plant. The diseased leaves eventually fall to the ground and decompose, producing organic residues containing alternaria spores. The spores of this fungus are very resistant and can survive for more than a year in plant debris in the soil. It is therefore important to avoid growing tomatoes every year in the same place as well as other solanaceous plants (potatoes, aubergines, peppers, etc.).

Alternaria can also infect other vegetables such as carrots and cucumbers. It is strongly recommended to rotate the crop every 3 or even 5 years. It is also important to avoid having one plot next to another that received tomatoes the previous year. An attack of alternaria on tomatoes is sometimes explosive, which requires a quick reaction from the gardener.

To eradicate Alternaria, there is no other solution than the use of an antifungal treatment administered at a fixed rate. In case of an epidemic, the whole crop can be infected and often it is not possible to grow tomatoes in the following years. Alternaria can easily be avoided by crop rotation and varietal selection. There are indeed varieties that are less susceptible to this disease (F1 hybrids).

Some carrot varieties (Dordogne, Laguna) are also very sensitive to alternaria and others are more resistant (Maestro, Brillance, Bolero and especially F1 hybrids).

Rotations are also essential for root vegetables and onions, which are easily affected by maggot.

For turnips, it takes 3 years to get rid of the rot caused by a fungus that causes a blackish discolouration on the surface before reaching the roots.

Unfortunately, many pests are able to parasitise several varieties of plants, which limits the scope of rotations. This is the case for verticillium wilt (a plant pathogen of potatoes, aubergines, cucumbers, gherkins, etc.) and root-knot nematodes (Meloidogyne) which can parasitise all crops.

Crop rotations are more difficult to organise in a vegetable garden than in a cereal monoculture. In a vegetable garden, plants follow one another on the same surface and one must take into account the proximity of incompatible species located on neighbouring beds that are likely to harbour polyphagous pests. Priorities must therefore be established. First, select plants that cannot be protected by insect netting, then those that are often subject to soil-borne diseases. Solanaceous plants that are frequently grown (tomatoes, potatoes, aubergines, peppers, etc.) should be chosen first. Then come the cucurbits (cucumbers, melons, watermelons, courgettes, etc.). These two vegetable varieties should be separated every year by at least one bed containing other vegetables (shallots, onions, green beans, root vegetables, salads, etc.).

Example of a 5-year rotation

It is said that the risk of spreading pests can be reduced by mixing different vegetable species. To give an example, in a crop bed radishes are mixed with carrots, turnips, lettuce... The odours of each vegetable would disturb the pests of the other vegetables and vice versa. Those who invented this device are certainly not aware that most pests are polyphagous and that, in the end, the result could be the opposite. In fact, in such a varied and well-supplied environment (the plants being very close), as in nature, the pests will have no trouble feeding and developing, moving from one prey to another.

Agonistic or antagonistic associations between plants.

Rotations should not be confused with agonistic or antagonistic associations between plants. These associations are often based on empirical observations that are rarely validated by scientific controls. And for good reason: in nature, many bio-aggressors, especially the most aggressive ones, have learned to recognise minute quantities of odorous substances emitted by their prey that they do not confuse with the other odorous substances sometimes emitted in abundance by other plant species. Otherwise, their lineages would have disappeared long ago due to a lack of food.

These associations between plants, which are recommended in many garden books and websites to keep certain pests at bay, can favour others. For example, carrots and celery should be grown in association with onions and lettuce, as these plants are likely to keep carrot flies away. But onions and lettuce attract polyphagous aphids that also love carrots. This type of association therefore offers more food to the aphids.

However, some studies have shown that certain plants called "service plants" can attract certain polyphagous pests and thus protect other crops. These service plants are cultivated for this purpose in the vicinity of exportable crops with varying degrees of success. For example, certain varieties of maize grown at the edge of fields are capable of specifically attracting aphids that are vectors of potato virus Y (causing superficial ring necrosis disease) ( ). The control of the Delia radicum fly on edible cabbage by the establishment of Chinese cabbage Brassica rapa in the vicinity of the plant allows the pressure of the pest on edible cabbage to be diverted due to its high attractiveness.

Unfortunately, the chemical mediators involved in attracting insects to plants offer prospects that have not yet been fully exploited for trapping insect pests.