Imports of beneficial insects against mites, thrips and bugs.

Mites differ from insects in that they have 4 pairs of legs and are somewhat related to spiders. Phytophagous mites are tiny (about 2 mm) and feed on leaf cells. Weaver mites, sometimes called yellow or red spiders, are among the most damaging species. They can be found in apple orchards, vineyards or in vegetable crops.

The bronze mite (Aculops lycopersici), also known as the "comma mite", is found on tomatoes and potatoes. The orange-coloured adult moves very slowly. Their presence causes the plant to dry out and can be confused with another disease such as alternaria.

The natural predators of the mites are ladybirds, bugs, lacewings and phytoséiides mites. The latter are characterised by high productivity and a very short life cycle of about one week when the temperature reaches 25°.

In case of heavy infection, biological control is undertaken, especially in Canada, by transferring wild strains of predatory mites thriving in reservoir orchards to crops where these beneficial predators are absent. The establishment of predatory mites is very effective and can reduce the cost of acaricides by up to 100%. For vegetable crops, it is possible to import a strain of the mite Phytoseiulus persimilis, which is a great fan of red spiders, for sale on websites.

A colony of phytoséiides mites can be fed with pollen from the reed canary grass which is a herbaceous plant found near bodies of fresh water or streams. The elongated, brown coloured inflorescences produce a lot of pollen which can be used to make a kind of bread. The most common strategy is based on frequent introductions of low numbers of mites to avoid negative interactions with other beneficial insects.

Trips are tiny, hard-to-see insects, 1 to 2 mm long. They sting leaves to feed on the contents of their cells. Thrips are vectors of viruses such as tomato brown spot. Other vegetables can be invaded by this bio-pest such as cabbages, green beans and cucumbers. Its presence is manifested by the appearance of small grey spots or greyish mottles corresponding to areas of plant cells emptied of their contents and filled with air. On tomato leaves, small light grey spots can be seen. Thrips do not like humidity and can therefore be prevented by frequent moistening of the leaves in hot, dry weather.

Steinernema feltiae nematodes are specific microscopic worms that parasitise soil insect larvae and thrips. Beneficial insects are not attacked. These nematodes can also be used against ants, leek worms, codling moths on apples, pears and plums. They are available for example by clicking here. 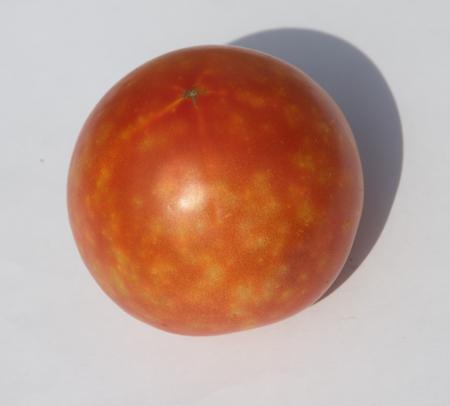 Yellow scars on a tomato caused by bugs ♦ 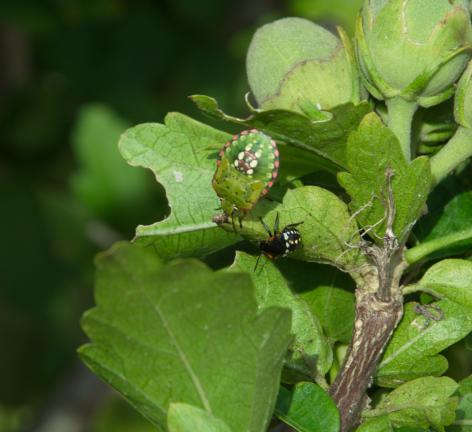 Adult and juvenile Nezara viridula bugs, found on a hibiscus stem. This bug is also fond of beans, tomatoes, aubergines...)

Some bugs in the garden are biting and polyphagous insects. Other bugs are carnivorous and omnivorous. For this reason, there is a risk of confusion, and some gardening books sometimes mention not destroying bedbugs.

If a misunderstanding is possible with certain more or less useful bugs (such as the pyrrhocore, also known as the "gendarme", which feeds on insect eggs and seeds), it is still easy to distinguish between harmful bugs that tend to gather on vegetable plants such as tomatoes and certain ornamental garden shrubs such as hibiscus, which then become veritable reservoirs of these bio-aggressors.

The green bedbugs Nazera viridula is very present in the Provence-Alpes-Côte d’Azur region and can be responsible for significant damage in the vegetable garden. This bug has emigrated to the north of France over the last twenty years. This bugs has the particularity of releasing a volatile compound with a bad odour as soon as it is touched. These bugs are frequently found on ripe tomatoes, which are then covered with yellow scars and lose their taste quality. These tomatoes are usually unmarketable.

In organic farming, there are not many solutions against these pests except for pyrethrin-based preparations. And still; some organic market gardeners have experienced failures with the insecticides registered in this sector. In the USA, a fly (Trichopoda Pennipes) is used as a biocontrol method, but does not seem to be available in France for home gardeners. Imported into Europe, it can sometimes be found in a pleasure garden or vegetable garden.

All the repellents recommended on websites such as sprays containing garlic extract, mint, tansy, catnip or essential oils are of little or no use. A repellent will only ward off the problem. The pests will feed close to the crop, often breeding within a few metres, and will eventually return to your garden in force at the first opportunity.

Also, are your neighbours willing to accept your bugs? And if your neighbours decide to use repellents, will you be happy to have these bugs (or other predators) in your garden?

If you do not have the possibility of collecting the pest bugs, esterified rapeseed oil (part of the Biocontrol plant protection products is more or less effective provided that the treatment is repeated several times with a dose of 30 ml/m² for one litre of spray solution.

The accidental introduction of Nazera viridula inside greenhouses is not exceptional. It is then difficult to control the population of this bio-pest which finds itself in the best conditions to develop. As this bug hates the cold, one can try to get rid of this bio-pest by opening the greenhouses as soon as the first frosts occur and after having removed all the organic detritus present on the ground followed by a ploughing.

Click on a button to move to another folder.

Control of whiteflies and scale insects.

Back to the page: Imports of useful aids