The benefits of plant diversification near a vegetable garden.

There are many examples in the scientific literature presenting of positive effects of plant diversification in and around cultivated plots limiting insect pest pressure. Studies have shown that the number of natural enemies is much higher in cultivated plots when the proportion of semi-natural habitats is high in the surrounding landscape (1).

During their lifetime, the ability of beneficial insects to survive and reproduce depends on the quantity and quality of food resources found in different types of agricultural, semi-natural and natural habitats. For example, a more heterogeneous environment supports a species of omnivorous carabid beetle (Poecilus cupreus), which is larger and has three times higher fecundity rates than individuals living in a simpler environment, such as in fields where pesticides are used (2).

As with field crops, it is therefore of interest to maintain natural and semi-natural habitats in the vicinity of a vegetable garden. To achieve this goal, how can the gardener design the garden and its surroundings?

To promote biodiversity in a small vegetable garden, it is not necessary to allow weeds to flourish in the cultivated plot for the reasons described in another article on this website dealing with accessible weeds here. However, in intercropping, an appropriate plant cover according to "soil conservation agriculture" techniques is recommended (see here), largely complemented by the installation of grass strips, hedges surrounding the vegetable garden, or even the maintenance of an ornamental garden close to the vegetable garden, including many species selected in order to favour useful interactions (see the article "Ecosystem services").

For grass strips, it is possible to choose several species of grass used for lawns rather than letting weeds grow, some of which are difficult to control (quackgrass, horsetail, bindweed, etc.). Note the development over the last few decades of residential areas with pleasure gardens, which are true semi-natural habitats that play an important role in preserving biodiversity (a).
However, houses and second homes with regularly trimmed lawns surrounded only by cedars or cherry laurels as fences are not the best examples. Many native or imported species should be allowed to grow under control in a patch of land or hedgerow to provide refuge areas for bio-agressors predators to survive. Do not forget the surface of non-grassed soils, which should be covered with plant debris (dead leaves, mulch, sawdust, etc.) to protect useful beneficials such as certain beetles that predate bio-agressors.

Compared to a cultivated area, a wooded area near a vegetable garden provides a more moderate microclimate to protect beneficial insects from extreme temperatures. Similarly, a vegetable garden near a herbaceous habitat, such as natural grasslands, will also be better protected, as grasslands provide overwintering sites for many species of spiders, ladybirds and carabid beetles.

A recent large-scale study undertaken by researchers from INRA and CNRS in collaboration with German, Spanish, English and Canadian teams showed that "increasing the complexity of the crop mosaic offers a considerable (and largely under-exploited) lever for conserving and restoring biodiversity in agricultural landscapes while maintaining agricultural production areas." (3) This situation can be found in many vegetable gardens where monoculture does not exist. Thus, the more varieties of vegetable plants the home gardener grows, the more he or she promotes biodiversity.

An ornamental garden should also contain floral species that are essential for the preservation of pollinators and provide aphid predators such as ladybirds and hoverflies with shelter and food. While hoverfly larvae eat aphids, adult hoverflies feed on flower nectar.

It is not necessary to systematically control sucking insects wherever they settle, if we want their predators to remain on the sites we wish to preserve in order to form natural reservoirs of beneficial insects. Otherwise, these useful insects will not be able to play their role in the vegetable garden when they are needed.

Let's not forget the small animals that participate in the regulation of biodiversity by offering them shelter, such as birds and bats that are big consumers of insects. When ladybirds and hoverflies are not yet active in a vegetable garden in early spring, aphids may not be a problem if they settle on ornamental shrubs (such as flowering laurels) or on flowers grown for that purpose. If ladybirds are overdue, then import them rather than spray the whole property with an insecticide. However, a pesticide treatment may be considered for a small area if absolutely necessary, for example to protect a bean plantation from aphid-borne mosaic virus. The use of pesticides is an easy and effective way to get rid of aphids (which are not resistant to these pesticides), but the main risk is that these pesticides will slow down the installation of useful auxiliaries in areas reserved for the preservation of biodiversity. 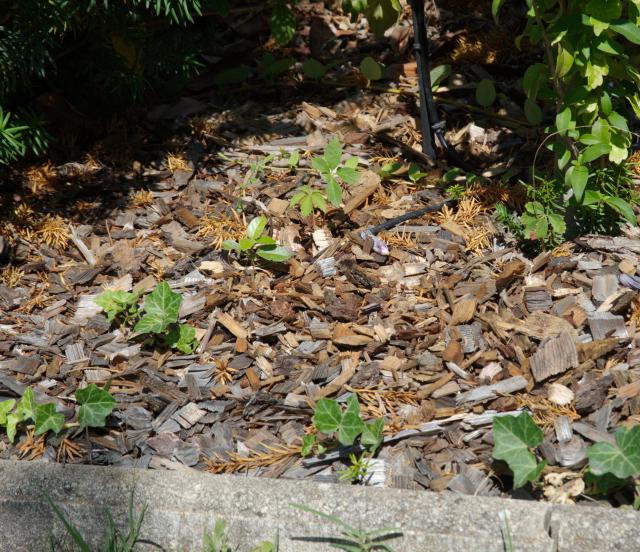 Mulches help to retain water in the soil by forming a barrier to sunlight. They can also provide a home for beneficial pest predators. The evaporation of water from the mulch cools the soil. Hemp mulches (NF 12580:180L) used in horticulture are very effective because of their water retention capacity estimated at 370 ml/l. Straw, wood chips and miscanthus (elephant grass) can also be used.

Originating from Africa and Asia, Miscanthus is a variety of rhizomatous grass that likes the sun and can therefore be grown in Provence. The first year, it is necessary to provide a soil rich in humus and frequent watering during the summer season. Miscanthus leaves that fall to the ground in thick layers provide shelter for beneficial insects and are then transformed into humus. The carbon-rich miscanthus shreds can be added to composts.

Miscanthus gracillimus is a variety used for planting hedges or ornamental beds. After its installation in spring, Miscanthus thrives for several decades without being invasive. Miscanthus is certainly one of the plants to be favoured in biodiversity corridors if there is enough space.