Other methods of limiting disease risks in agriculture

⇒ Other methods to reduce the risk of disease

On the difficulty of maintaining the balance of ecosystems in a microscopic garden.

Lilliputian vegetable gardens, sometimes bordered by a few wooden boards, are in fashion. Easy-to-grow vegetables such as tomatoes are most often popular. Sometimes wood ash, home-made compost or compost of dubious origin is spread indiscriminately. In the first year, acceptable results are often achieved, and then disappointments accumulate in the following years. Downy mildew on tomatoes is becoming more and more frequent. Courgette leaves are more easily covered with a white powder and die. Radishes have galleries... Why do these problems accumulate year after year?

It is very difficult to rotate crops in a microscopic vegetable garden, which results in the accumulation of pathogen spores in the soil that thrive every year at the expense of vegetable crops. In addition, the use of organic fertiliser made from compost without a thermophilic phase easily brings diseases.

So what should be done?

Several plots should be arranged in different parts of the property, or the cultivation area should be enlarged so that it has a rectangular shape divided into plots to facilitate the establishment of rotations. Otherwise, one should engage in alternating monocultures on the single plot. For example, tomatoes should be grown on the same bed every 5 years to prevent them from being affected by alternaria or blight. To reduce the emergence of diseases, it is essential to choose resistant varieties, such as F1 hybrids.

Why it is not advisable to maintain a vegetable garden below the ornamental trees.

Another mistake often made by beginners is the delimitation of a vegetable garden within the root system of fruit or ornamental trees. This arrangement is sometimes chosen because it would take into account agroforestry techniques. However, trees and shrubs must be placed on sufficient space between cultivated plots to avoid competition with crops. If trees and shrubs take up water and mineral salts from the deeper layers, they do so for their own sake. The organic matter containing these minerals is available when the leaves fall to the ground and after their decomposition, which takes place in late autumn and winter. The roots of trees, although they produce underground litter that will be transformed into biomass, absorb large quantities of mineral salts from the soil.

It should always be remembered that trees are formidable competitors for small plants grown in a vegetable garden. In temperate regions, a tree's root system generally covers at least an area that is limited by the longest horizontal branches or more. The root surface of an oak tree is capable of spreading over 56.7 m² and over 60 m² for a red maple (3). Even if regularly trimmed, a hedge located too close to a vegetable garden has the same effect. Tree-crop associations should be made in such a way as to create an environment that facilitates ecosystem services and not an area that increases competition for soil nutrients, sunlight and water.

Irrigation by sprinkling or drip irrigation.

Contrary to what is often claimed on internet sites or in garden centre books, sprinkler irrigation counteracts the development of certain bio-aggressors (in particular mites and powdery mildew), provided that it is not practised in the evening, or even very early in the morning. Thrips are very common in the Provence-Alpes-Côte d’Azur region, whose development is favoured by the hot and dry climate. Thrips hate humidity and frequent sprinkling will reduce the proliferation of these harmful insects. Of course, the irrigation channels will not have this protective effect. In fact, many holidaymakers have noticed that in the Provence-Alpes-Côte d’Azur region, market gardeners and arboriculturists do not hesitate to irrigate by sprinkling in summer in the middle of the day without affecting the crops.

It is the persistent humidity during the night that favours the establishment of bioaggressors. Overhead irrigation removes pest spores deposited by wind and insects. However, watering during heat waves can burn the leaves of the most fragile plants. Ideally, watering should be done in the late morning around 10-11am just before the temperature rises, or in the late afternoon if there is still enough sun to dry out the stems and leaves before dark. In addition, it is certain that more water is wasted through evaporation when watering in the middle of the day during a heat wave.

Drip irrigation is known to reduce water consumption. It also has the advantage of reducing fungal infections on certain crops such as lettuce, which are very sensitive to excess moisture, especially when the apple is forming (production of water deposits from the sprinkler inside the apple). This problem also exists in rainy regions and can be reduced by installing a tunnel with a transparent, waterproof cover to protect the lettuce. This cover can be folded to the side when it stops raining.

Tomato necrotic mosaic is caused by a polyphagous virus of cucumber or other aphid-borne viruses of potato. Young plants are more susceptible than mature plants. It is therefore important to avoid planting young tomato plants susceptible to these viruses outdoors in June and early July when aphids are at their peak. These plants should be planted in the spring under plastic sheeting as soon as the frosts are over.

Use seedlings rather than bucket plants. 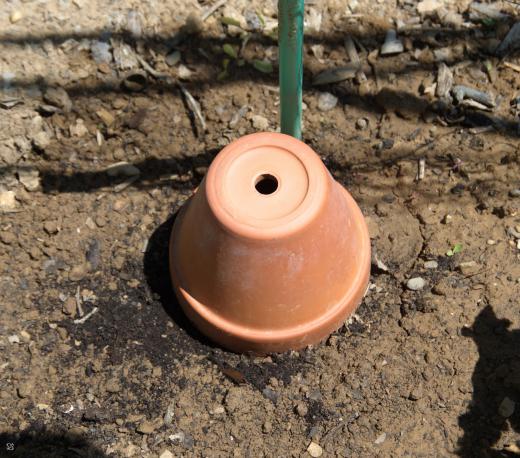 Cucumber seedlings in the ground protected by an inverted clay pot.

The use of bucket planting has become very common. This system of planting saves time and avoids the need for a heated greenhouse in early spring. There is now a thriving industry of young vegetable plants in pots for home gardeners and even for market gardeners. The seedlings are delivered in cups filled with potting soil. However, this solution has some negative effects. For some plants, there is a more or less aggressive transplanting stress when the roots of the plant are brought into contact with the garden soil. The pot plant is in a protected environment and receives preventive treatments, often sulphate-based. After transplanting, it is suddenly in contact with a more aggressive environment. Courgette and cucumber plants are particularly sensitive to transplanting stress. The germination of seeds sown in the field can be protected by using small inverted clay pots, with the seeds placed in a small hole covered with moist potting soil.

Allow 2-3 seeds per pot to replace any losses. You can also try germinating small seeds (lettuce, leeks, etc.) in frames (still called layers) covered with glass frames on a south-facing sloping surface. A mat is placed over the glass frames in case of late frost. This very old process is very effective in obtaining plants that are protected from the cold and already used to the garden soil before transplanting.